The emerging 5G Technology at higher frequencies is our main subject of concern. 5G is a technology dedicated to lightning-fast connectivity to smartphones, low ping, boosting various industries such as infrastructure, FMCG, tech-related: AR-VR, Robotics, Software, and more.

In November 2018, a message on social media went viral claiming that over 300 birds died in the Netherlands during a 5G connectivity test. 5G side-effects intrigued many health and climate enthusiasts around the globe.

The high demand of 5G will create more 5G Towers to support network connectivity in the future. However, 5G communicates using radiofrequency waves, which in turn emit harmful EMF radiation. In the long run, the implications are still to be discovered.

What are 5G Cell Towers

5G cell towers are telecommunication antennas that bring ultrafast network connectivity. They interchange data from one device to another using high radiofrequency waves known as RF. Usually, this exchange of data is discrete where no one can eavesdrop on the communication between two devices.

The towers have antennas attached on top, which carry out the process of network connectivity. Different antennas have different functions, for example, transmitting antennas send a signal to mobile, and receiving antennas take the signal from mobiles back to it.

5G towers send signals in a wave pattern which often gets affected by the surfaces between the transmitter and the receiver end. Buildings, trees, rocks, etc. are a hindrance to these signals and make it difficult to travel.

These towers are created on leased sites that are either owned and operated by the mobile tech companies themselves, or through third-party infrastructure firms. All the towers are interconnected to the wider network system through a fixed or wireless connection known as a backhaul link and host antennas that form the radio network.

Network operators will use a combination of low, mid, and high range frequencies to support different 5G use cases. Millimeter-Wave (mmWave) frequencies are used by some applications that need high bandwidth and instant connectivity. However, this is hampered by its low range and poor propagation features. This means that in addition to using traditional mobile towers for 5G, operators will need to intensify their networks in urban areas, through micro infrastructure.

As per a survey, 85% of mobile phone users have heard of 5G networks, but only some have access to 5G smartphones. The telecommunication industry giants have executed their advertisement campaigns effectively, resulting in the increase of 5G smartphone sales.

55% of people amongst these users have a fundamental understanding of 5G connectivity, while 40% are aware of the complex technical components. The remaining 5% who aren’t aware of this network are the same ones stocking up on 5G smartphones with a massive number of 5G cell towers around them.

WHO & IARC announced that frequency radiation (EMF) could potentially be cancer-causing in 2011. IARC has classified RF radiation as “possibly carcinogenic to humans,” and shows potential risk for brain tumors and different kinds of cancer among cell phone users. IARC suggests taking pragmatic measures to reduce exposure such as hands‐free devices or texting. Another way to neutralize emf exposure from cell phones is by using emf protection devices.

What Are The Health Risks Involved With 5G Towers

The American Cancer Society says that currently there is no direct correlation between cancer and the radiofrequency waves from cell towers. The studies seem to indicate a higher risk from cell phone use than living near a cell tower because exposure from a phone is usually higher than from a tower itself.

A 2018 toxicology report by the National Institute of Environmental Health Sciences, expressed health safety concerns. It was observed that male rats with high doses of radiofrequency radiation exposure developed a cancerous tumor in their cardiac muscles. However, female rats/mice remained unaffected. This RFR was higher than that emitted by smartphones.

The report further states: “The levels and duration of exposure to RFR were much greater than what people experience with even the highest level of cell phone use and exposed the rodents’ whole bodies. So, these findings should not be directly extrapolated to human cell phone usage,” said John Bucher, Ph.D., NTP senior scientist. “We note, however, that the tumors we saw in these studies are similar to tumors previously reported in some studies of frequent cell phone users.”

The bottom line is that nothing conclusive has been ruled out and the long-term effects remain unknown. It’s no wonder then that cities and residents are skeptical. As the public increases awareness about the number of small cells and cell tower sites, residents in cities such as Danville, CA are pushing back. Opponents are organizing to attend city council meetings to express concern.

Currently, 5G Towers work on a low-frequency module and are considered by the FCC to be harmless. But, due to lacking evidence and insufficient research on the upcoming higher frequency 5G networks, we cannot indeed believe that there will be no repercussions.

Radiation power is generally the strongest at 50 meters from the antenna and keeps falling the farther you get. After 150 meters it becomes weak. This is because of the mobile’s additional efforts to reach out to the radiated signals. Consequently, call drop increases in shadow zones and at longer distances from cell towers. 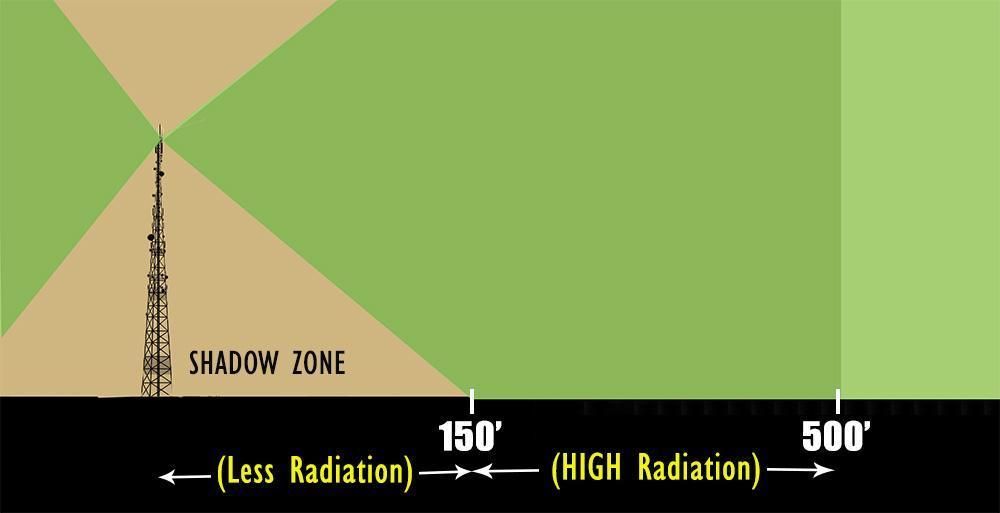 In short, radiation from a mobile phone tower is a 24/7 slow roast. The harmful radiation can be mitigated by avoiding the line of sight or shielding procedures. However, we have known instances where high proximity to cell towers has led to cancer cases.

However, the bigger risk is the damage from our mobile phones in places where the mobile network coverage is not strong enough. This has a more significant bearing on individual health, raising concerns about cluster headaches, deafness, tinnitus, and even brain tumors.

Will There Be Any Safe Distance In Future?

As the 5G infrastructure continues to grow at speed, higher amounts of RF waves will surround us. More towers mean more transmission of signals constantly being sent to cell phones and other devices.

There is no definitive answer to a safe distance from a cell phone tower. Multiple factors affect mobile radiation intensity and it is evident that anyone in a 150-meter radius could be exposed to high frequencies. Also, if the tower is 300 meters or more away from you, this could lead to weak network coverage – leading to signal drops. But, ironically, most of the time, we are more concerned by the mobile phone tower 300 meters away from our location and choose to be conveniently ignorant about the mini cell tower that we carry on ourselves throughout the day – our cellphones.

We still have control over our surroundings, environment, and daily habits. Small changes can make a difference. Protect yourself and your loved ones from Cell Phone EMF Radiation.

Does 5G Radiation Harm Humans And The Environment?

Does 5G at 60 GHz Stop Humans From Absorbing Oxygen?

FDA Disclaimer: None of the statements on this web site have been evaluated by the FDA. You should consult a licensed health care professional before starting any supplement, dietary, or exercise program, especially if you are pregnant or have any pre-existing injuries or medical conditions. These statements have not been evaluated by the Food and Drug Administration. These products are not intended to diagnose, treat, cure, or prevent any diseases.